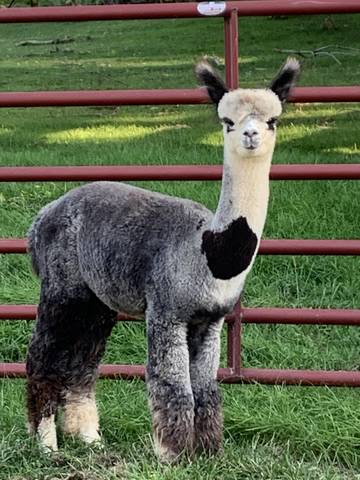 Irish Meadows' Maverik is a perfect junior herdsire for your black or gray program!  This male has stunning good looks as well as crimpy, low micron fleece in a gorgeous dark silver gray color!  Maverick can boast of having an 8 time champion classic gray sire, Irish Meadows' Peruvian Showtime, as well as having a 4 time champion black dam, FPA Corrine.  Maverik's pedigree is full of multiple banner winners, and we expect him to produce that excellence as well.  Maverick comes from a long line of gray and black, so he should produce those colors easily.

Maverik has eye catching appeal with his pleasing head style and overall conformation.  Maverik's sire Showtime has had very successful crias in the showring this past spring, including a 6 time champion black female as well as 4 time champion gray male and female.   All were juveniles when they earned their banners, a feat hard to accomplish!  We look forward to showing his next crop of crias, and you can look forward to it as well with Maverik!